Did you know the French meal structure was declared an intangible world heritage by UNESCO in 2010?

I will give you the insider tips to feel at ease during a French dinner! It is an understatement to say that the French food culture and etiquette can be complex.

French people don’t necessarily realize it, but the eating protocol and the importance we give to food is quite intimidating sometimes for our beloved international friends.

Many times, I have invited foreign friends to eat with my family, for special occasions such as Christmas, birthday meals, or BBQ parties and they were not expecting the way French people were doing it.

Social gathering around a meal is very cultural, I felt the cultural shock around food culture when I was living abroad. And for me, this is one of the most exciting cultural discoveries! I loved experiencing an Argentinian or Brazilian BBQ, a Russian family dinner or a Catalonian calçotada!

You will soon understand that I LOVE food!!! I’m a gourmande as we say in French. This is a word I never found an exact translation of in English, as I feel the literal translation “greedy” has a negative connotation. However, it is not the case in French. Many people in France actually see that as a positive!

If you haven’t had the opportunity yet to participate in a French dinner party, you might be wondering what makes it so special.

I have detailed for you the extended French meal structure for special occasions. This applies to every special occasion meal and not only the gastronomic fancy ones. Get ready for a food marathon!

Aperitif (or apéro in colloquial language)

What is a French apéro?

If you are already in France, for sure you have already had an apéro, I hope. This is a drink (usually an alcoholic drink) people would have before their meal. It is the first step of the traditional French meal structure. It could be before lunch (usually taken on weekends but not only) or before dinner either at home or in bars and restaurants.
The apéro is usually served with small snacks, more or less elaborated.

If the apéro is taken at home with guests, we usually have more elaborated snacks. A very simple one would be raw vegetables either cut in batons or in small pieces in a homemade dip. It can also be canapé. Funny thing: French people do not use so much the word canapé, we tend to use the English word toast more often. The list of appetizers could be infinite.

If you are invited for an apéro, it usually means that there will be food…

…unless people specify that it is just for a drink.

It is always better to ask what you should bring, but a bottle of wine is always a good option. If you don’t want to risk buying a bottle of wine for a French person, a bottle of beer or even a good quality juice and small snacks will be fine. If it were a formal dinner party, I would recommend wine, flowers or chocolates, or anything specific from your country.

When you are invited for an apéro, the snacks are usually the food people will have the entire evening.

French dinners with guests always start with an apéro. Don’t eat too much as it is just the beginning of a long meal!

Many years ago an Argentinian friend of mine was doing a European tour. She spent a few days at my parents’ place in Lyon. We had a nice dinner and because I didn’t think of explaining to her the way the dinner would go, they were almost full by the end of the apéritif!

Once the aperitif is over, the host usually invites to move to the dinner table.

During a French meal, dishes are always served one after the other.

So you do have to manage your appetite if you want to make it to the desert!

The first course is usually light, often a salad. There can be several starters such as a salad with a quiche, or paté.
In France, the salad can be only lettuce with vinaigrette sauce! A Russian friend of mine once told me that he was shocked the first time he was served lettuce in France. For him, lettuce alone was rabbit food!!!

A small wine lover tip: it is not so common to have wine with a salad containing vinaigrette. As its name stands; it contains vinegar that does not go well with the wine. In any case, many French people will still have wine anyway if they feel like it.

Then your host would take out the first-course dish to bring the main course. If this is a fancy dinner, the plates can even be changed for each course.

The main course is usually meat or fish served with vegetables and/or carbohydrates. We do not have more than one carbohydrate on the plate (such as rice and pasta or rice and potatoes, as some countries would have). However, bread will always be served with the food.

Vegetarian dishes are not so common and are not part of French food culture. However, there are more and more vegetarians and therefore vegetarian restaurant options in big cities.

French food is regional; therefore, there is no national French dish. For example, the crepes are from Brittany, and the quiche is from Lorraine in the northeast of France.

As well as food, wine is a regional topic in France, considering almost every region produces its wine. The regional food matches pretty well the local wines. Many French people tend to drink mainly their regional wine and sometimes from other French regions. Foreign wines are slowly entering the French market, but it is not a French habit to have the curiosity to try wine from overseas.

I was 23 when I tried foreign wine for the first time! At the time I was living in Argentina! Imagine!

Yes, cheese is a dish in France and an actual part of a French meal! Again, cheeses are regional too! The famous Camembert is from Normandy for example.

There are about 30 cheeses that you will be able to find everywhere in France, and the rest are only local. I guess you are wondering how many French kinds of cheese there are! Well, there is no set number but it is somewhere around 250 to 350 different types of cheese. Some people say that there is one different cheese per day of the year!

Cheese is always eaten with bread. It is a common phrase to hear as a child that cheese should be eaten with bread and not alone. In the same way, children would be told to finish their plates or stay at the table until they are told they can go.

There is also an eating etiquette for the cheese. I advise you, to observe first how French people cut and eat their cheese and try to do the same. Some French people will not care how you cut it; others will comment and tease.

Different types of cheese have a cutting method. So it is hard to go into details, but the main rule is to cut it in a way that you will not leave the crust to the last one. So for example, the Roquefort should be cut vertically and not horizontally, and the Brie point should not be cut.

French people usually end their meal with a sweet note, even for everyday meals. A simple dessert would be having a fruit or yoghurt. Cakes and pastries are a treat.

French people do not eat pastries every day (at least most of them) even though the bakeries are filled with delicacies.

You would think the menu is over, but there are still two (and a half) steps to go for a full French meal and respect the authentic French meal structure. For most French people it wouldn’t be complete without…

Having an espresso, especially after a big meal is a must-have for many people, including myself! When we say coffee, we usually mean espresso. If you would like a long coffee (Americano style), you should always specify.

When eating out, if you don’t like the strong espresso or the alternative coffee with milk, it can be a challenge to find other types of coffee. Before coffee chains arrived in France early 2000s, it was not common to find Macchiatos or Mochaccinos.

And last but not least…

This is the last step of the traditional French meal structure. This one is really for special occasions, 3 hours or more lasting meals! We start with alcohol, so we have to finish it with alcohol too!

French people would only drink liquor at the end of dinner, no aperitive. Cognac is a famous one or Brandy. We wouldn’t have Cognac for the aperitive or a glass of wine after the coffee. I wouldn’t be able to tell you why… so let’s put it on tradition.

The French way of eating is full of protocols and rules that can be confusing, some would say that it prevents creativity, and maybe it does. But it is still very good.

There is half a step missing… this one is usually spread along the main course as special occasions meals that can last hours… shots of brandy (called eau-de-vie) can be offered. We call this habit of drinking brandy during the meal “Faire un trou Normand”, the traditional one should be with Calva (short for Calvados in Normandy) a 40° or more apple brandy.

If you have survived this everlasting meal with French speakers, congratulations! You are now an expert on the French meal structure and might even start to enjoy these long dinners! 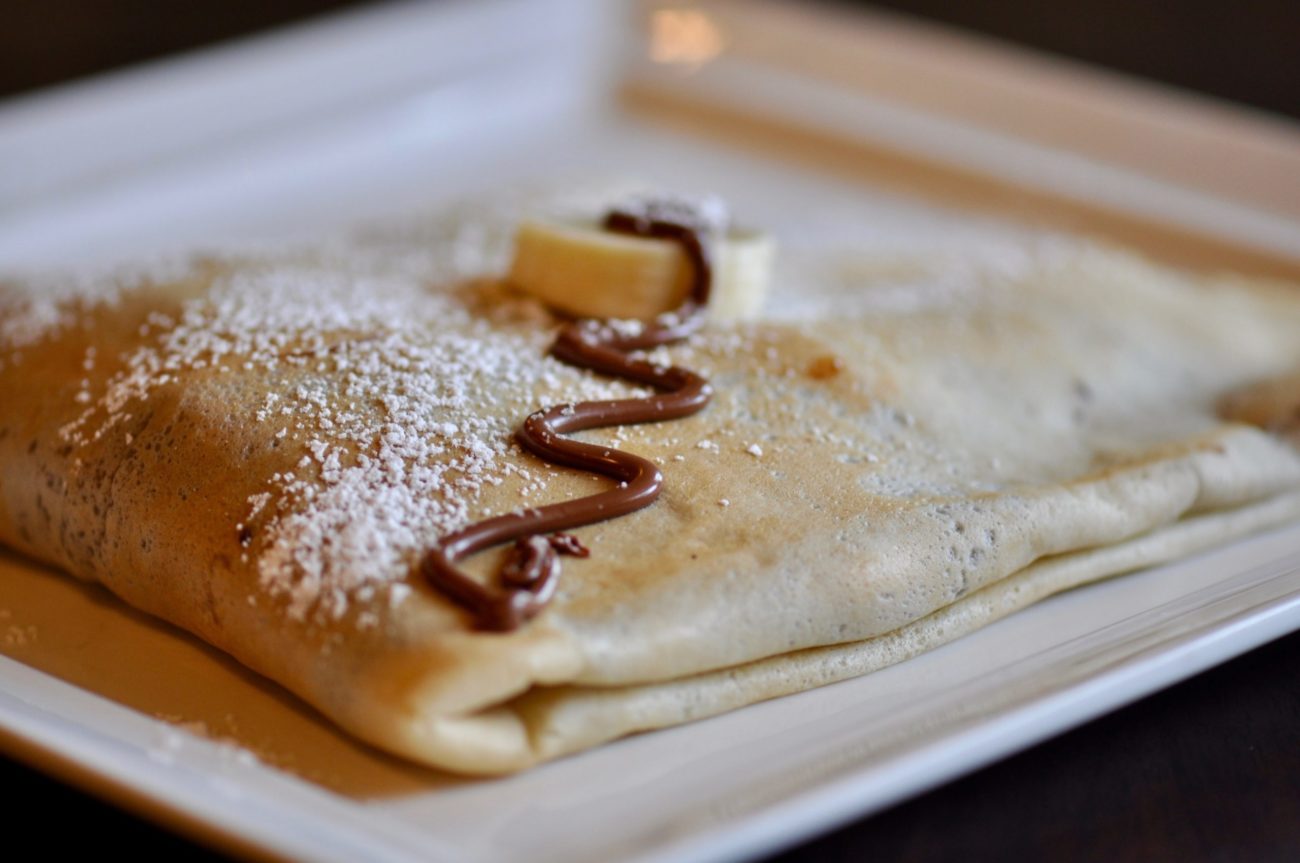 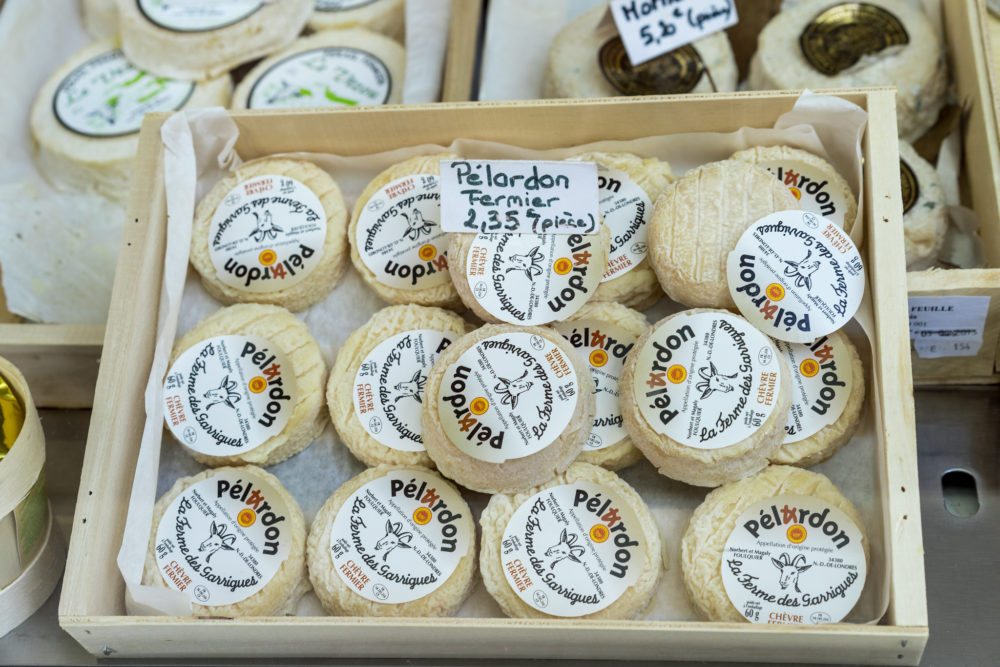 How to master the art of eating cheese like the French?